In Finland there has been a lot of talk about "synnytystalkoot" and reduction of the birth rate. We are approaching a very sensitive matter, that no one has the one right answer to, but I would love to see more possibilities in the discussion, rather than just risks and requirements (for the mothers’).

And I knew it, this was definitely the opportunity of a lifetime

I thought I was making a normal and very personal decision when coming to Sievo two years ago. Little did I know. I had had my second born couple weeks earlier when I heard through a friend there was an open recruitment specialist position at Sievo. And I knew it, this was definitely the opportunity of a lifetime and my kind of a role. Had always wanted to get into the IT business and recruit some unicorn developers. So in the middle of the night, when the baby was calmly sleeping, I drafted my application. And after a rather swift process I even managed to get the job!

How would we manage?

My first thoughts were excitement covered with doubt. Even though we had discussed it thoroughly with my spouse, now the sh*t had gone real. “How would we manage? Would the baby be ok without his mom? Was I a bad mom, for even wanting this? How would others feel?” But there was the clearest answer already at hand; my spouse had already pre-agreed with his employer to use the parental leave. Finland actually offers extensive benefits for the care of babies, unlike anywhere in the world, for both of the parents.

I had a private area to breast pump daily

The “normal and personal decision” became abnormal and extraordinary by the opinions and ways of others. I was asked several times how was I able to proceed and leave my baby and wouldn’t I have loved to spend the time with the baby and my first born. Thankfully, my new employer Sievo was nothing like it; people were intrigued by my decision and called me courageous. I had a private area to breast pump daily and there was extreme support from my colleagues to my needs on flexible working.

No, I am not saying it was easy or for everyone, but we should not deny the possibility for parents’ to be supported in different kinds of life choices. Finland is already at a good stage with parent equality, but we can do more. My kids will see an independent but empathic woman example, when making hard tough choices. What will the next generation learn from you? 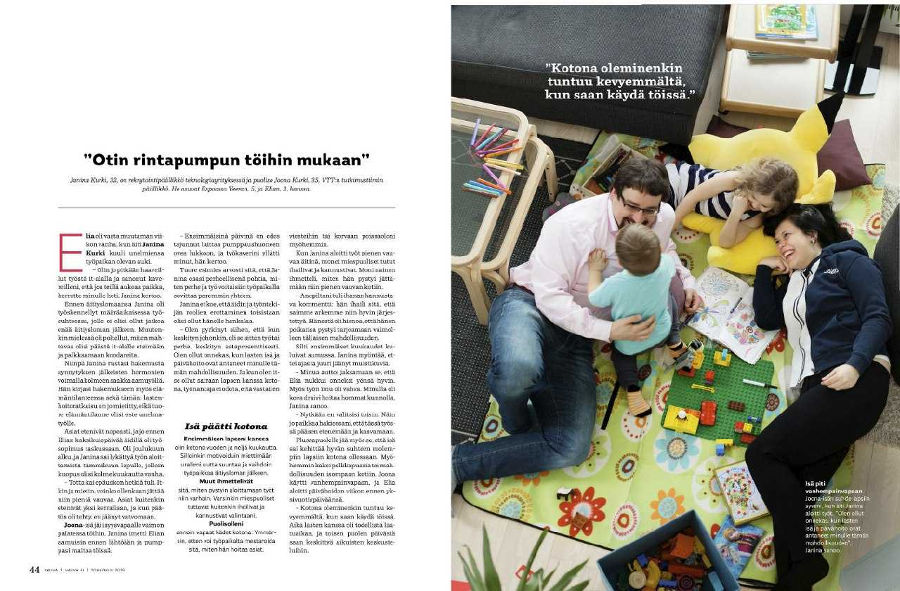